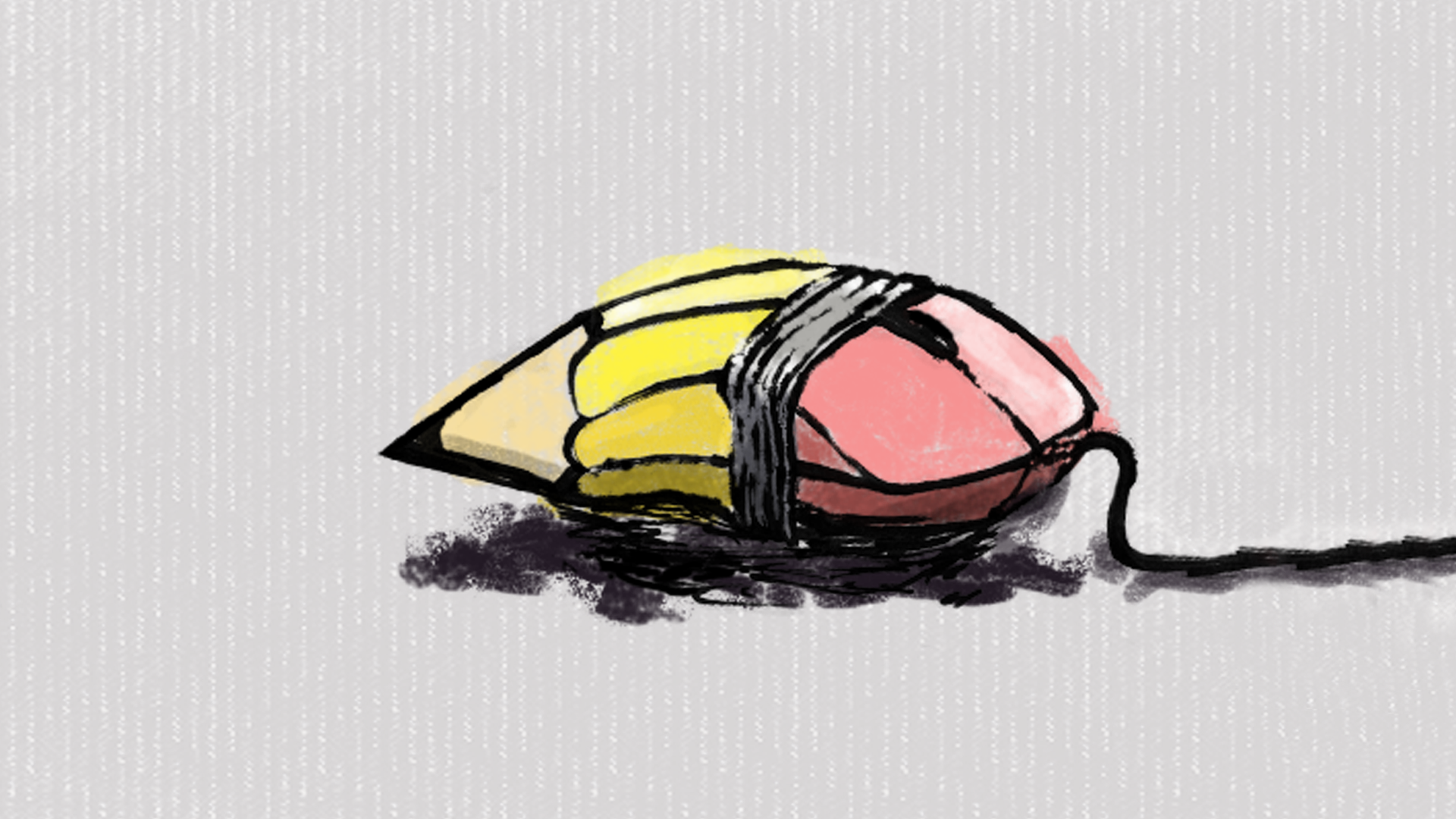 the death of drawing

He said if he had another brush, he’d get me to join him. I was glad he didn’t.

A couple years ago, I was lying on the grass between afternoon sets at the Telluride Bluegrass Festival. Near me was a gentleman who pulled out a sketchbook and watercolors, and after a few pencil strokes was painting the scene in front of us. Though Telluride is set in an area of remarkable scenery, he wasn’t painting landscapes. He was painting the constructed stage set, where the next performers were warming up.

Anyone openly conducting their artistry in public view is always a curiosity, so I started a conversation. I did a fair amount of watercolor when I was in school, but after I graduated in graphic design, time and technology took their toll. I commented on the gentleman’s work and my shared interest in the medium. He told me that he was an architect and in fact, had designed the stage structure he was rendering with fluidity. He said if he had another brush, he’d get me to join him. I was glad he didn’t.

That experience came to mind again when I was reading an American Institute of Architects chapter email that commented about a new book by a local architect. It was the title that caught my attention: The Death of Drawing. I connected with David Ross Scheer, the author, and we had an engaging conversation about the impact of modern technologies on his profession—architecture, and on my own—graphic design.

The parallels are remarkable. In both of our respective careers we’ve watched the transformation of our professions move from something whose craft was based on hand skills to something now closer to automated algorithms. The introduction to Scheer’s book begins, “Like may architects, my enjoyment of drawing played a large part in my choice of career. I like the feel of a soft pencil on good sketch paper… I like watching and feeling my hand find a form on paper I hardly knew I had in mind. I even like the laborious process of making presentation and working drawings.” Graphic designers of my generation would say the same thing.

In my conversation with him, Scheer made the point that digital technology is definitely affecting the practice of architecture—but that it’s not necessarily a negative thing. In fact, the benefits of technology are so great, there’s little other choice. He also made clear that the impact in the profession is not with simplistic CAD drawings, but instead with the more recent and widely adopted Building Information Modeling and computational design.

For graphic design, the use of digital technology began earlier and had immediate impact. Today, the profession is so closely associated with the computer that some young practitioners incredulously think that graphic design didn’t exist prior to Apple Computer’s wide adoption in the 1980s.

When I started in the profession, designers were like the wizard behind the curtain. The knowledge and abilities required to produce good graphic design were so obscure, that no one but the well trained had a clue. It gave us the power to control. These days, your grandmother can easily produce decent flyers for the neighborhood street party. Similarly, Scheer states that conventional drawings maintain an architect’s power in the relationship. “At every stage of a project, drawings give the architect control of the flow of information and thus the ability to see to the integrity of the design intent throughout the process.”

When helping a novice to understand the difference between design and the technology that creates it, I’ve often said that the computer is just a bigger pencil. Scheer states that these technologies are not “another pencil: they are both evidence and agents of fundamental change.”

The legendary graphic designer Milton Glaser has said, “In teaching [today], I’ve found that students have absolutely no idea, or any ability of any kind to represent their ideas through drawing . . . the imperative to draw has vanished.” He concedes that it might be a generational thing and acknowledges that digital tools “are a very useful part of what I do after I work through ideas”. But Glaser believes digital design suffers from what he calls a “lack of fuzziness.” He suggests that it is to the advantage of both client and designer, if certain amount of ambiguity is part of the design process—which is an inherent result of an iterative process of sketching and drawing. “The problem with the computer is that when you go on the computer, everything has to be made clear too quickly,” he says. “And so the essential part of the developmental dialectic disappears. The greatest liability to the computer is that a lot of weak ideas are very well developed. The computer clarifies things too quickly.”

In The Death of Drawing, Scheer expresses similar concerns regarding “the replacement of drawing by simulation. Whereas drawing is based on a clear distinction between the two, simulation strives to eliminate any space between them…. Interpretation plays no part in understanding simulation.”

In our conversation Scheer said that architectural digital visualizations have become so good, that often you can’t tell it’s not the actual building. “We want media to reproduce reality to the point that simulation is ‘as good as’ reality…. Leaving little room for the critical space for imagination and play that should exist between them.”

And yet, Scheer explains, “There are already many examples of buildings that would not have been possible to design or construct without these technologies. Exciting new possibilities of building form abound, but there is some uneasiness about this new-found freedom.”

Throughout the history of graphic design, (and, I suspect, architecture), the technology used to express the medium—whether it be Gutenberg’s letterpress, Art Nouveau’s lithographic posters, or websites on your phone—has always had a huge impact on design.