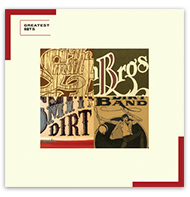 When Randall Smith, modern8 Creative Director, was young and foolish, he started a band. That was 1968. Certainly it was long enough ago that you can excuse it. The funny thing is he started it up again about five years ago. Not content just playing gigs for friends, family and retirement centers, the band decided it needed a CD. So, vinyl records from the 70s were digitized, and “The Greatest Bits of The Smith Bros. Dirt Band” was resurrected from the distant past. He’s already given away as many as possible but the balance is available from the modern8 store. Or you can download it directly from iTunes, Amazon or Spotify if you don’t feel the need to see photos of Randall with his BeeGees haircut. (You’ll have to enter “Smith Bros. Dirt Band”…they’re not exactly a featured band.)