Pulling off a successful event can be extraordinarily difficult, whether personal or corporate. It all comes down to details. Paying attention to the minutiae of event planning and execution is exactly how modern8 and the founders of Marae approached the creation of their new brand identity. We crafted new letterforms in an elegant thick and thin typeface without serifs, but not a san serif in the conventional understanding. The layout of their business card echoes the layout of elements at an event—exquisite but understated, clean yet rich. We love their services and their identity. 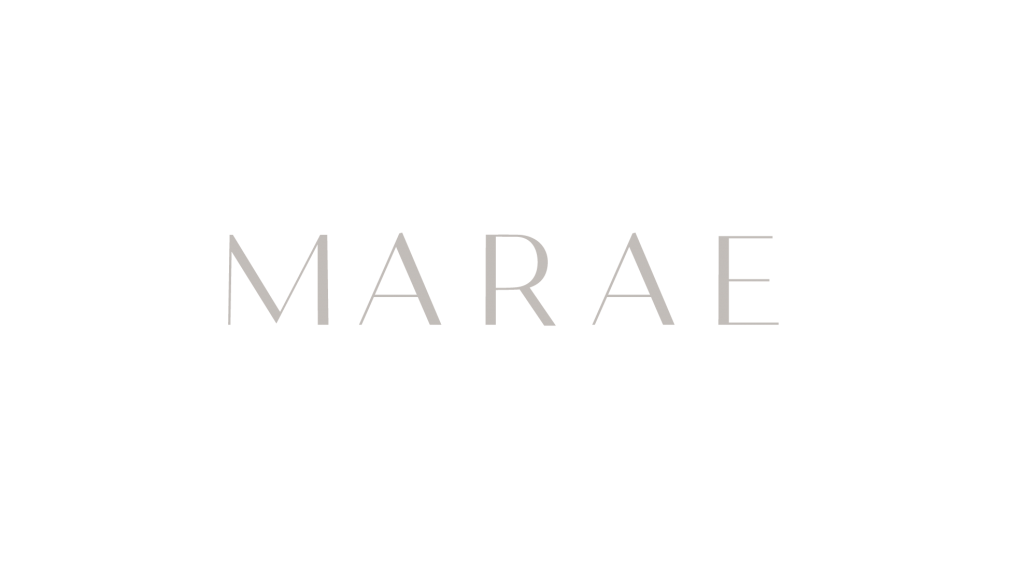 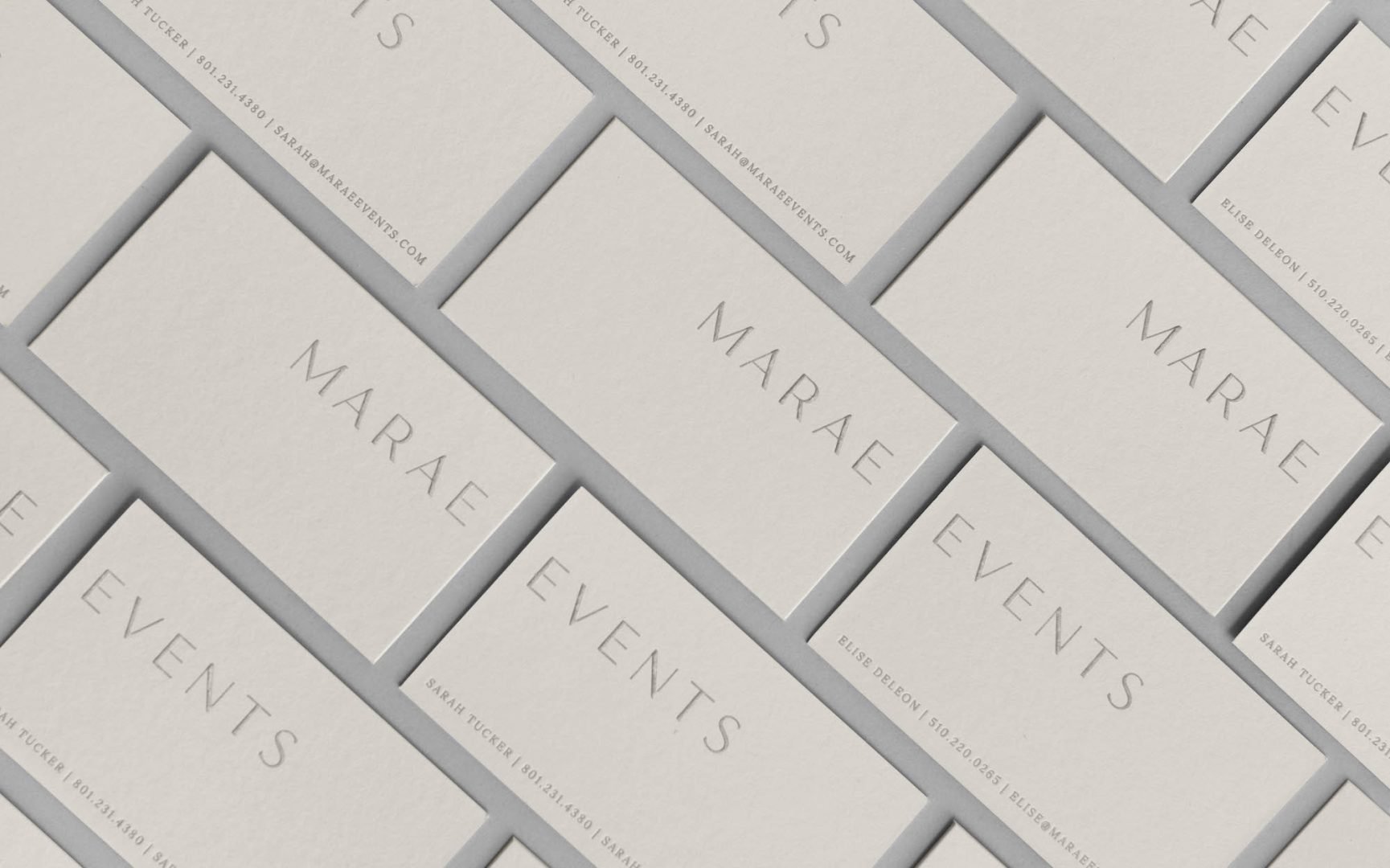 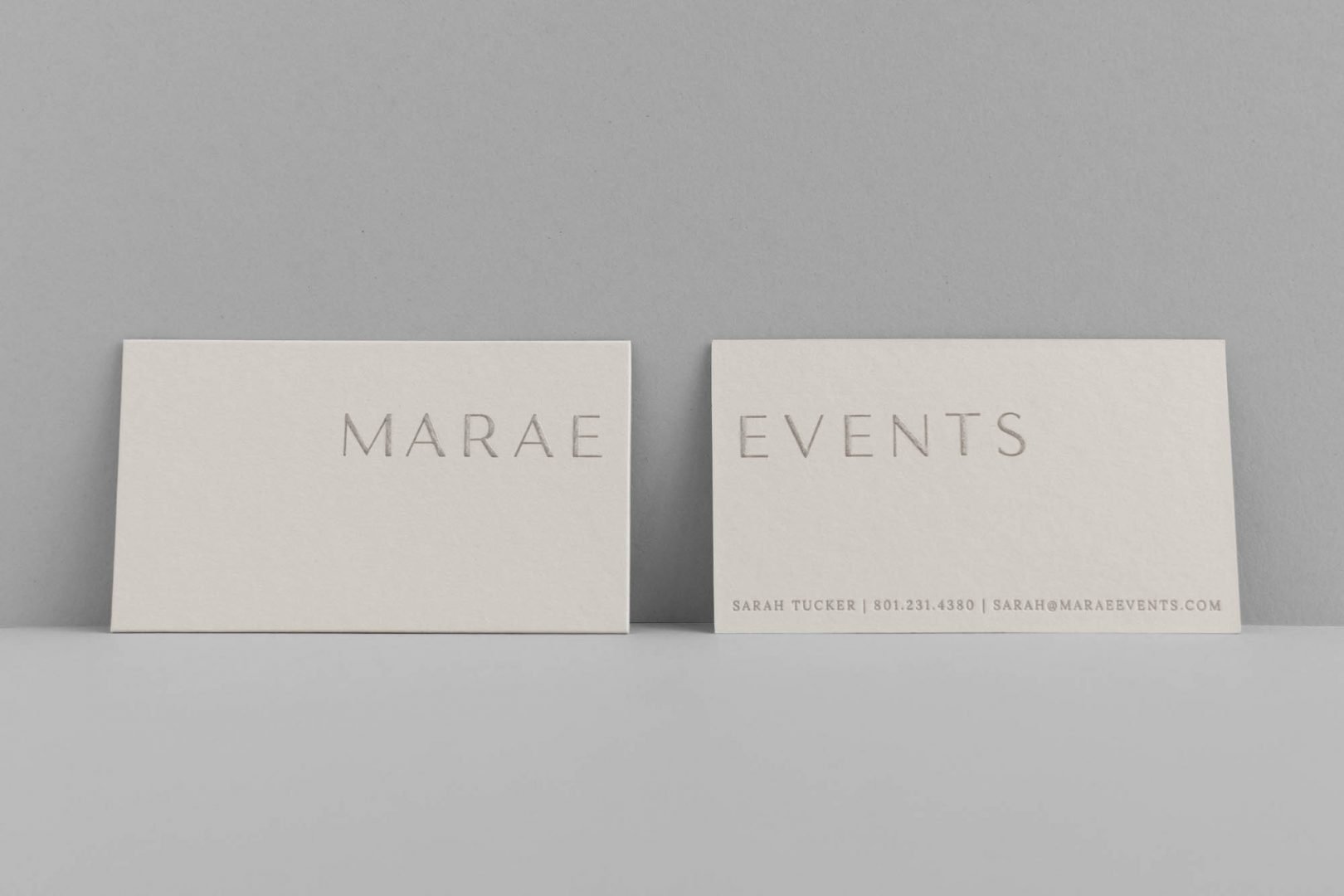 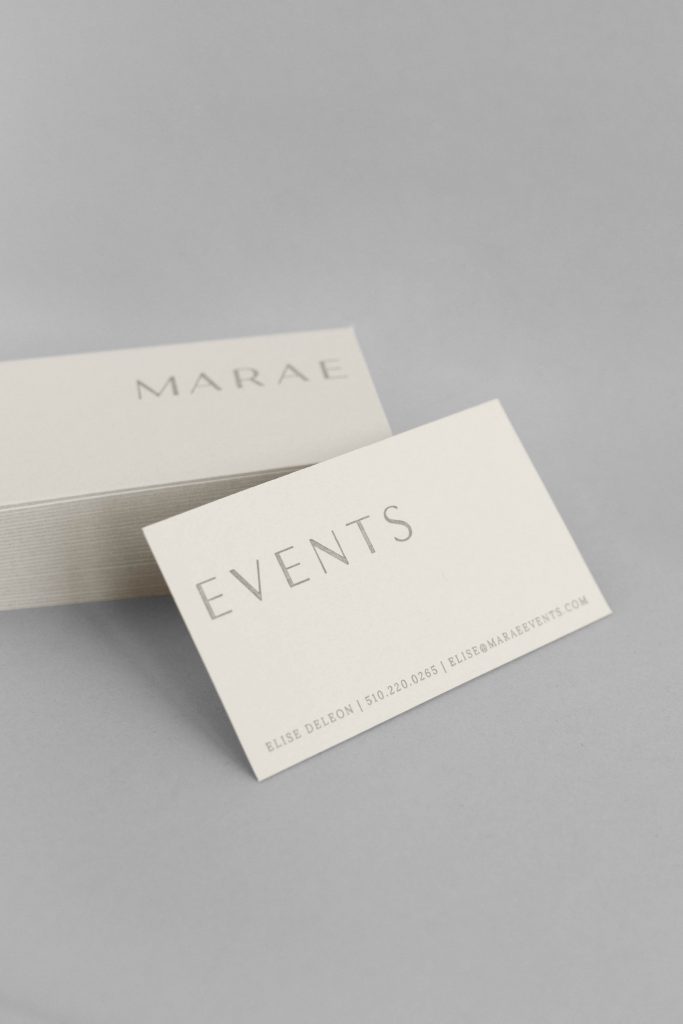 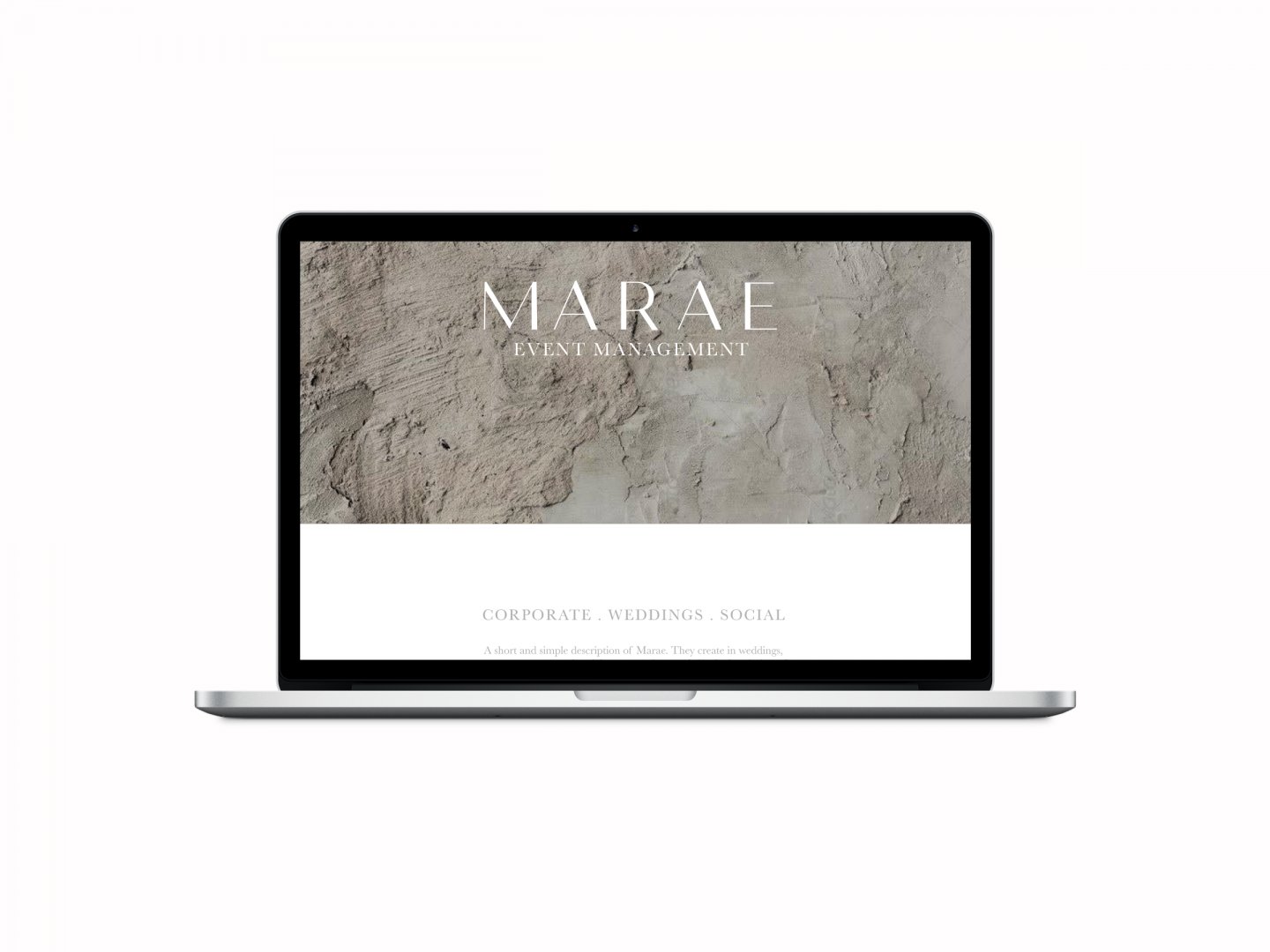 AND AGAIN, AND AGAIN.

For many years in a row, we’ve had the pleasure to help Pioneer Theatre Company with the design of their annual season brochure and advertising. With an attention-grabbing new size and fold, we depict each of the nine productions with an illustration, description, and creative credits (which, we’ve learned, must be at least half the size of the title)! The brochure’s purpose is to sustain season ticket sales, while digital, outdoor, and print advertising—which uses assets we created for the brochure—promotes individual ticket sales. We’re usually there on opening nights. Join us! 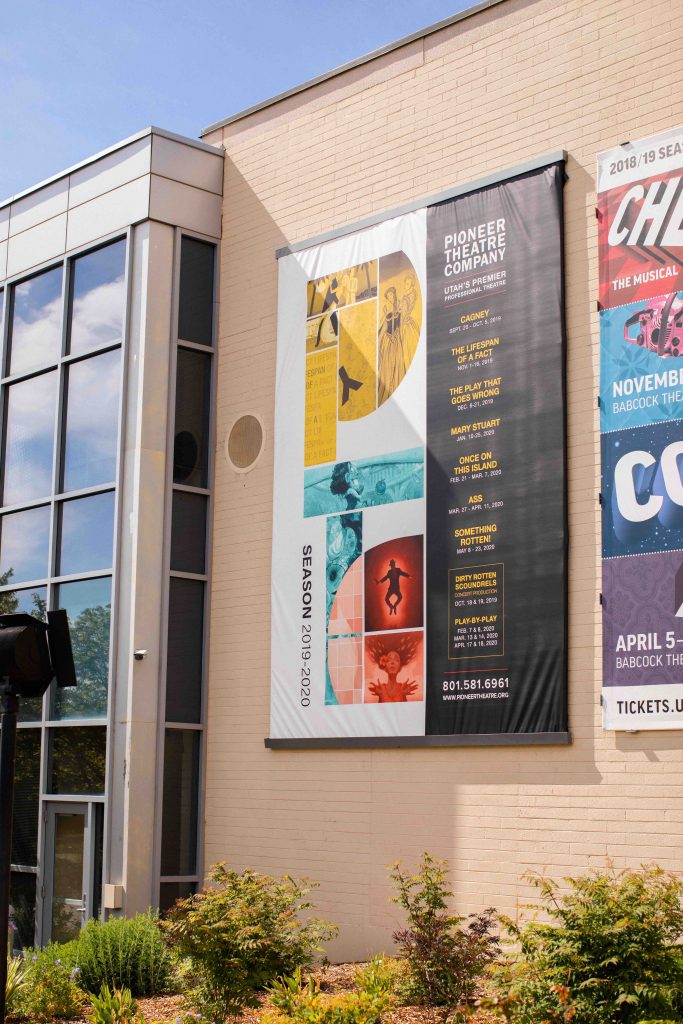 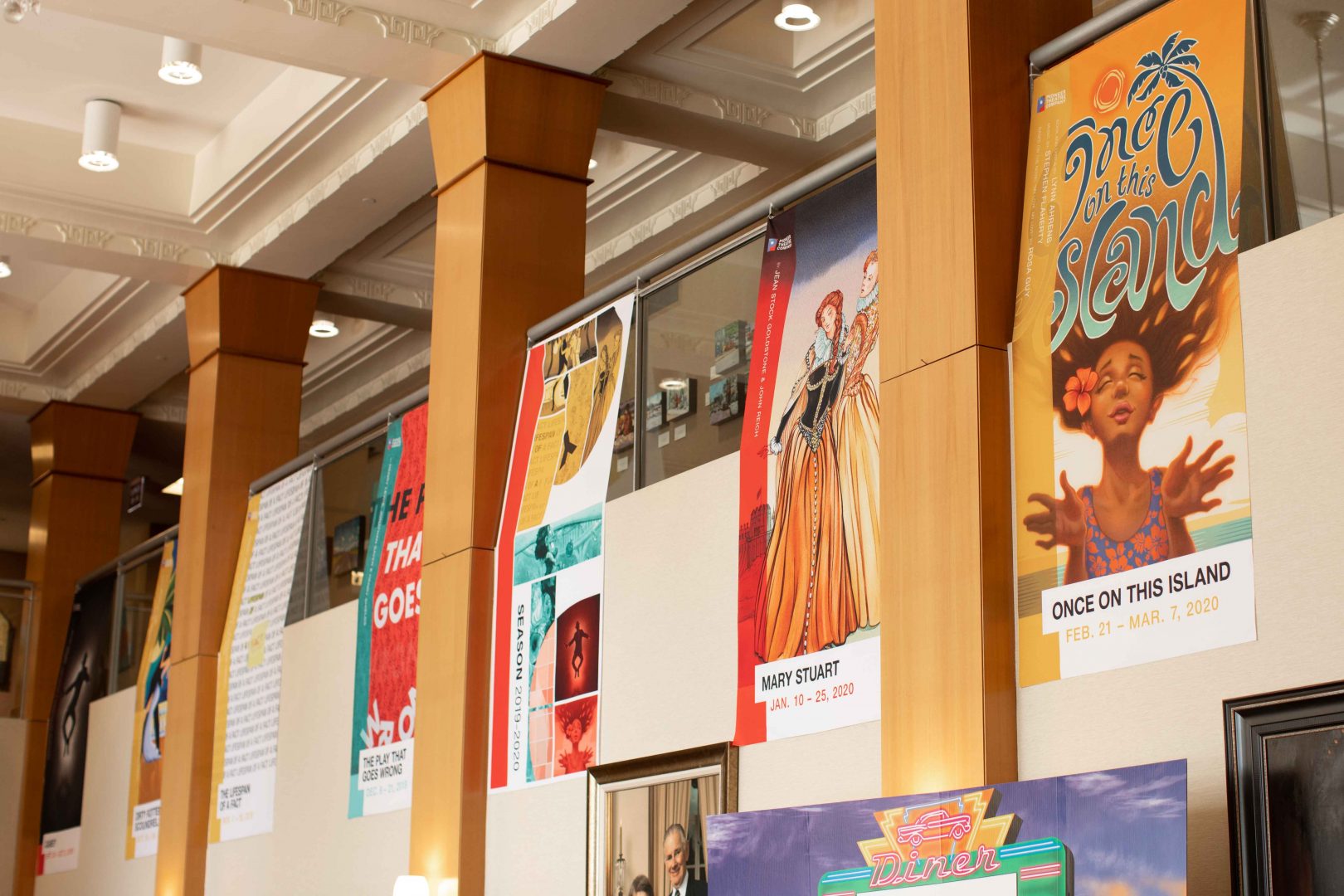 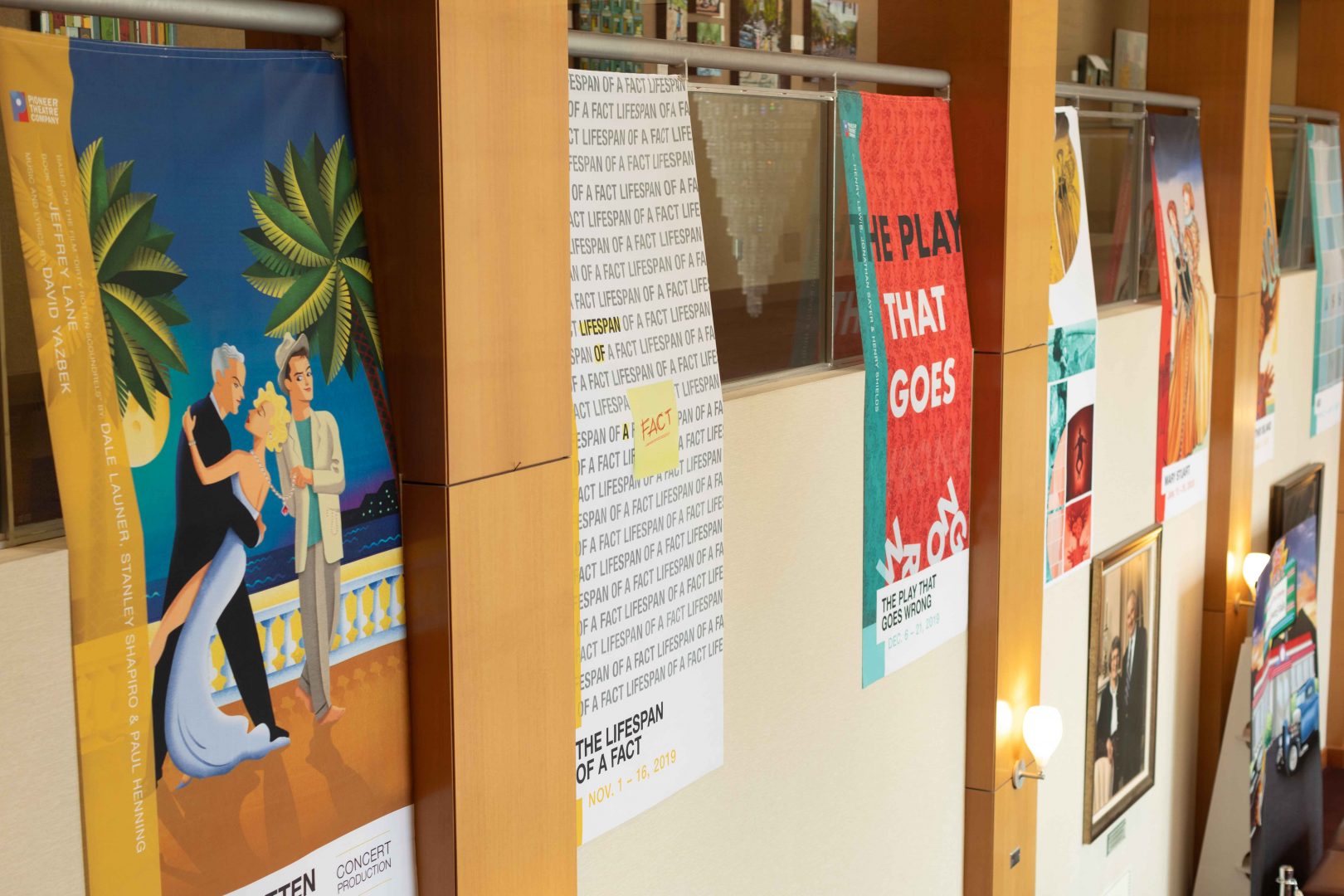 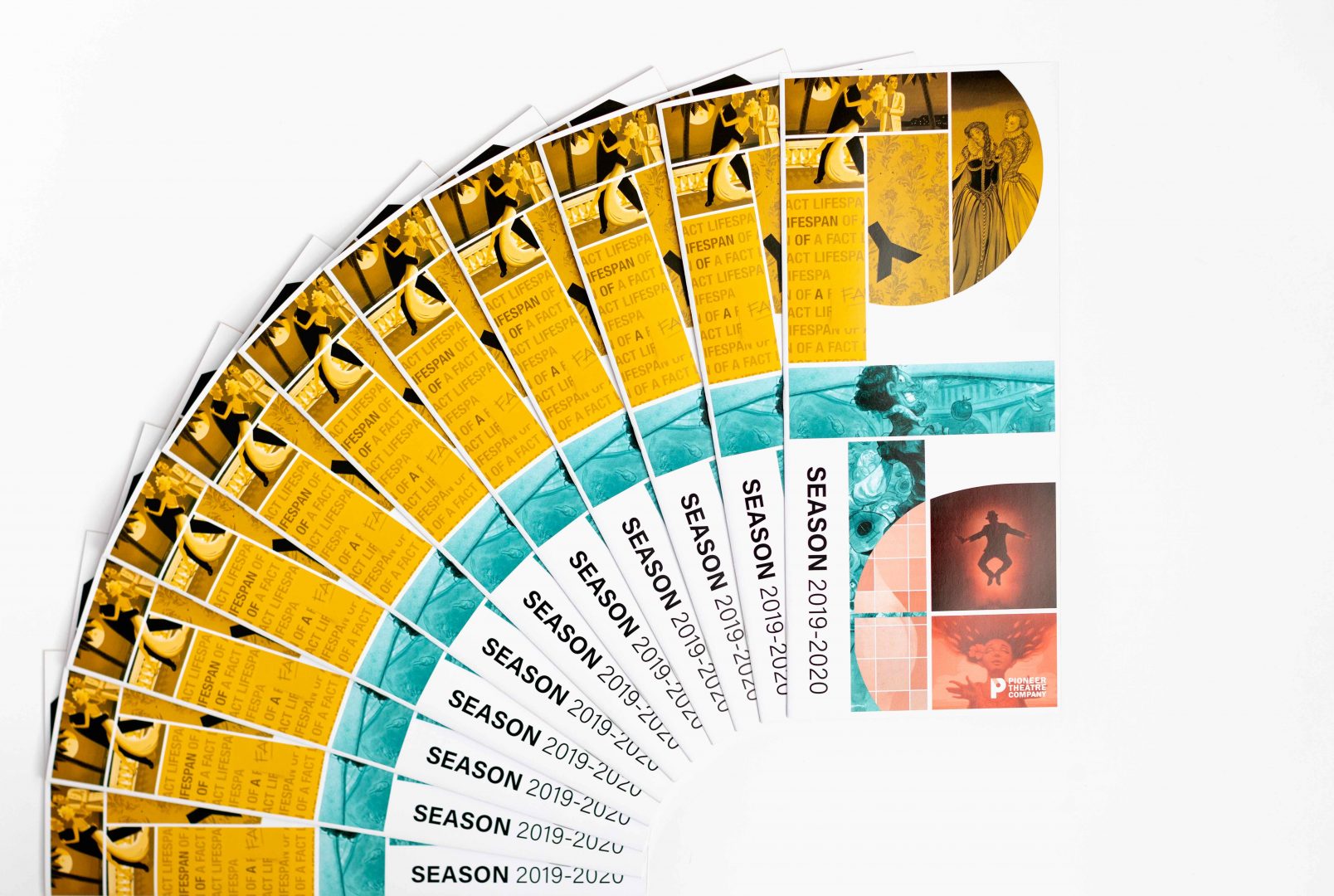 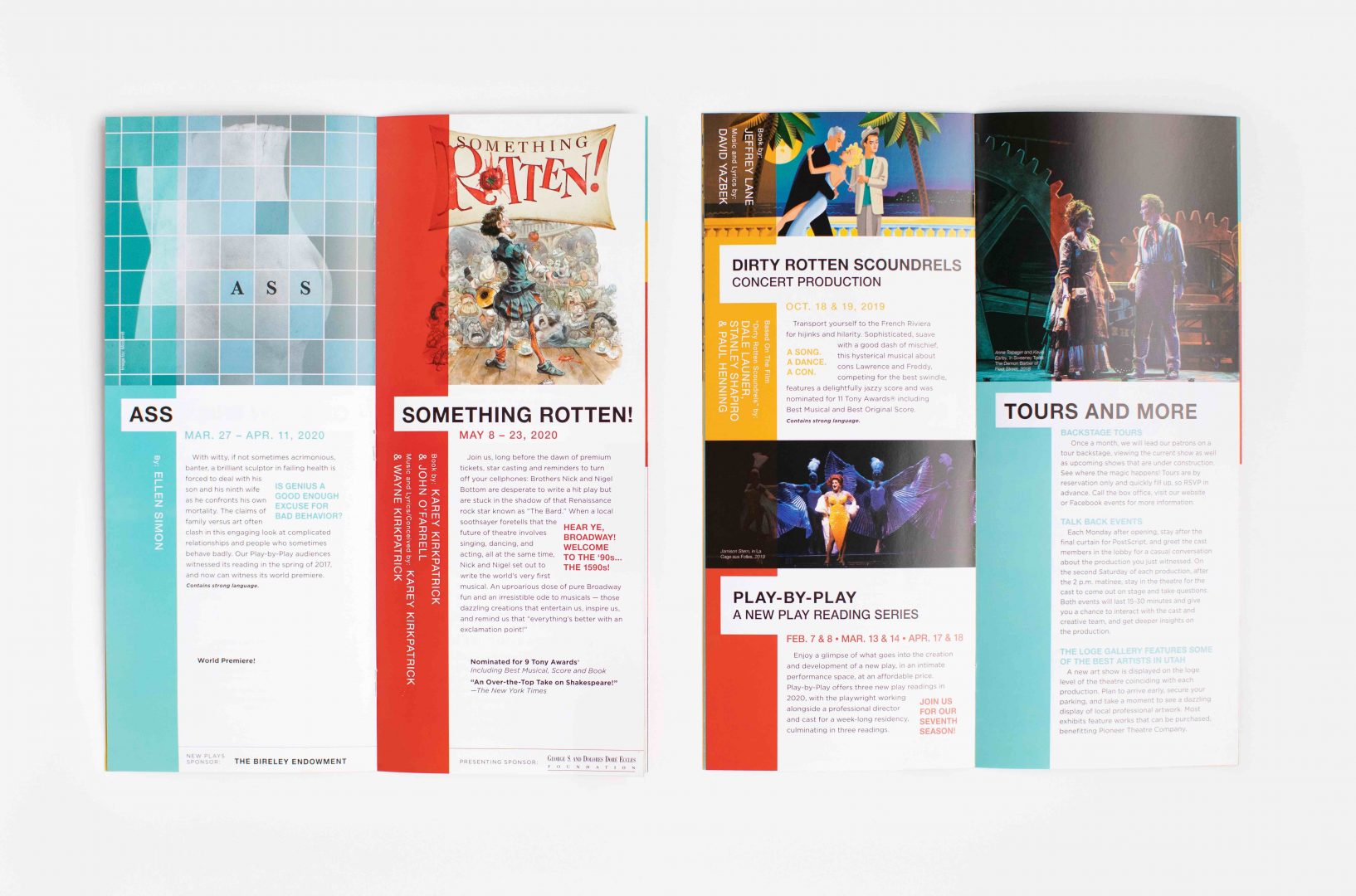 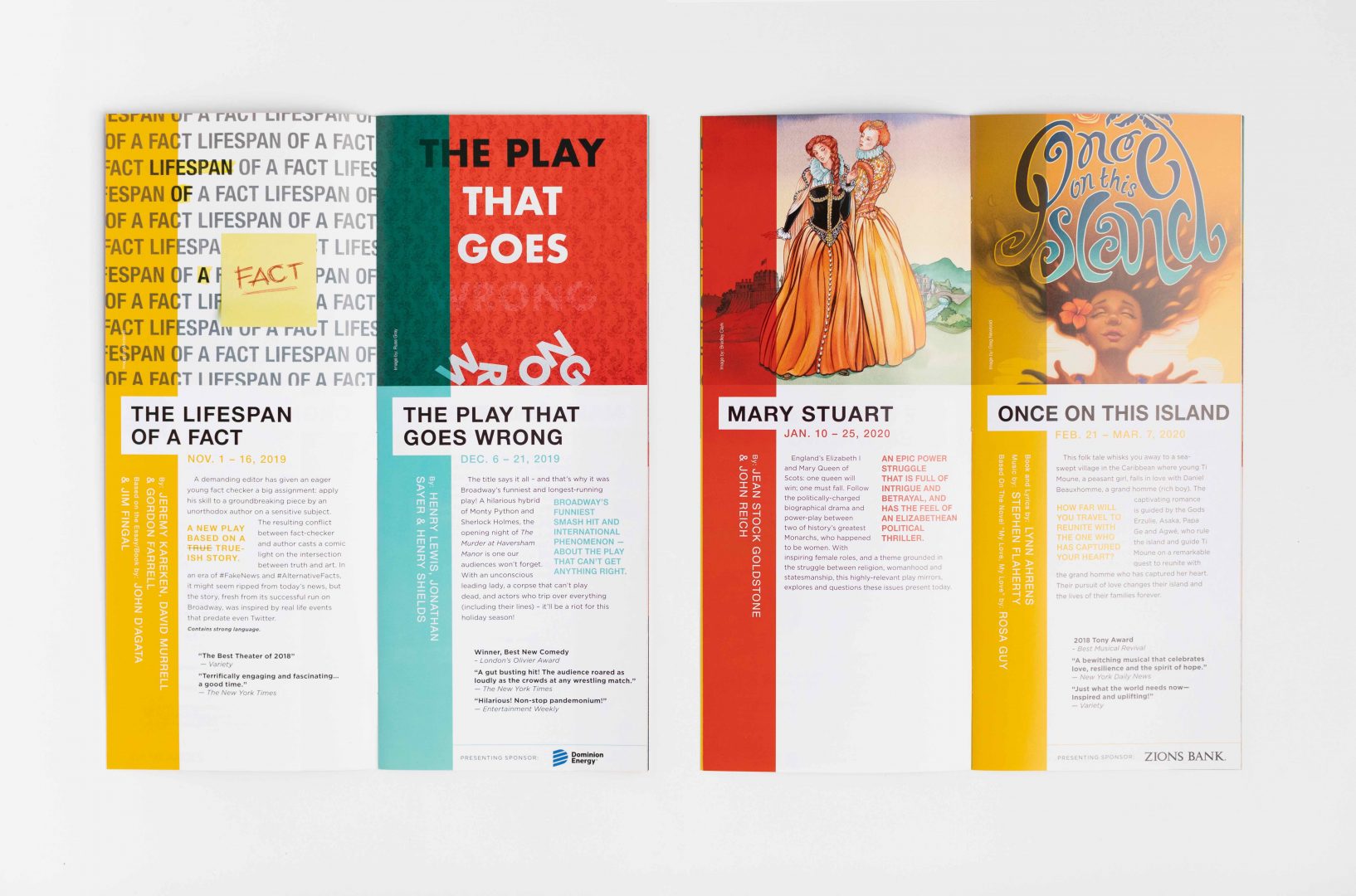 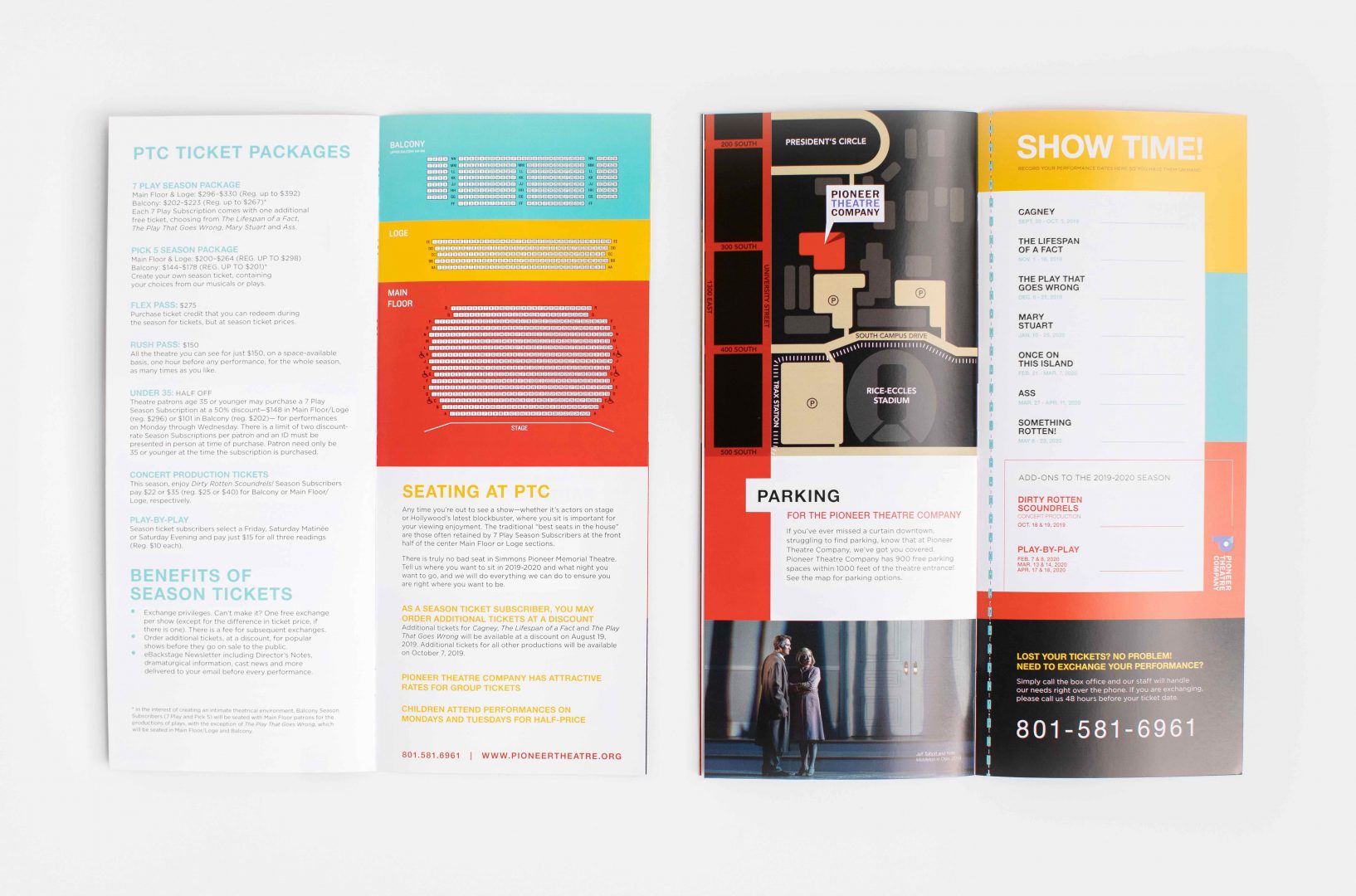 The Silicon Slopes Tech Summit has turned into one of the biggest annual events to descend on the Salt Palace Convention Center across the street from our downtown office. Over 20,000 attendees join to hear prominent speakers and network in the exhibit hall. For the first time, modern8 was a sponsor and had a booth, with our new reel (link) and an interactive game based on brand archetypes. Two days of talking to people led to new leads, new friends and a hoarse voice.

How could we say no when Silicon Slopes asked if they could write up an article about Randall’s latest AIGA Fellow Award and his legacy at modern8? Read about what they had to say. It’s on point—like Randall’s style.

Randall Smith, founder of modern8 and recent recipient of the prestigious AIGA Fellow Award, is a man of eclectic and refined tastes.

Beyond the eccentricities of this fine bulleted list, however, Randall Smith is known for design. He has spent 30+ years in the space — teaching, creating, forming the design agency modern8 in 2001 and never looking back. Design is his passion and through his work at modern8, Randall and his team have helped shape many of Utah’s most recognizable brands, including tech companies like inContact, RizePoint, and Impartner.

“What we do is very important for clients in terms of how they see themselves, how they want to project themselves, and who they are at their core,” said Randall.

modern8 was founded at a time when public perception towards brand strategy was murky at best, uninformed at worst. Randall saw opportunity to offer not only creative services, but strategic services as well. These two concepts were melted into a process that modern8 has used (with some tweaks and modifications) for nearly 20 years: the Perception Branding d5 Process.

Now hold on. I know this sounds intimidating, like a science experiment performed by a back-alley doctor using 5 d’s and a rusty knife. I can assure you, this is not the case. The Perception Branding d5 Process is (relatively) painless and to the best of my knowledge, uses no knives. And in the hands of modern8, the process is transformative.

It’s quite simple in explanation, more painstaking in execution: five words that start with d, used to shape the branding process.

“Before trying to create anything, before trying to design a solution or implement anything, we need a thorough understanding of the client and their objectives,” said Smith. “We’ve refined and enlarged that since the founding, but it’s the same basic process.”

Steps 1-3 are strategic: discovery, distill, depict. This comes through extensive management interviews, understanding the core message of the brand, and then presenting their findings. Steps 4-5 are pure action: design and deploy.

Smith and modern8 believe brand strategy is expressing what a company is. This can come in a multitude of forms depending on the clients needs, including identities, websites, literature, trade shows, and many other mediums. It’s important to be distinct — Smith says he has spoken with executives who can’t distinguish between branding on their own website versus their competitors.

Smith founded the Salt Lake City chapter of AIGA (American Institute of Graphic Arts) in the late 1980s, and based upon his work with modern8 and 30+ years of involvement in Utah’s design community, Smith was awarded the AIGA Fellow Award — according to my design sources, it’s a big deal.

“I was very appreciative and totally surprised by it,” said Smith

On the west side of SLC (west of 400 West to be exact) is a vibrant, engaging array of various businesses and communities. The River District Chamber of Commerce emerged last year, out of a business alliance of 20 years, to advocate for the businesses and community organizations in the area. In addition to the visual identity, we will be putting up some murals and street art within the River District over the next few months to begin rolling out the new branding. 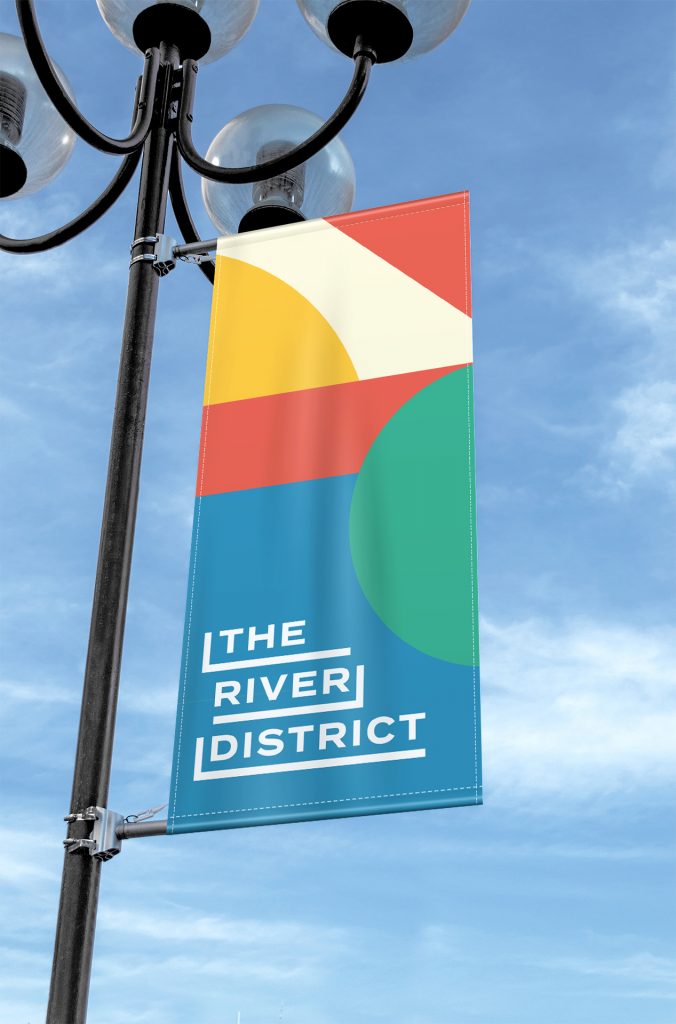 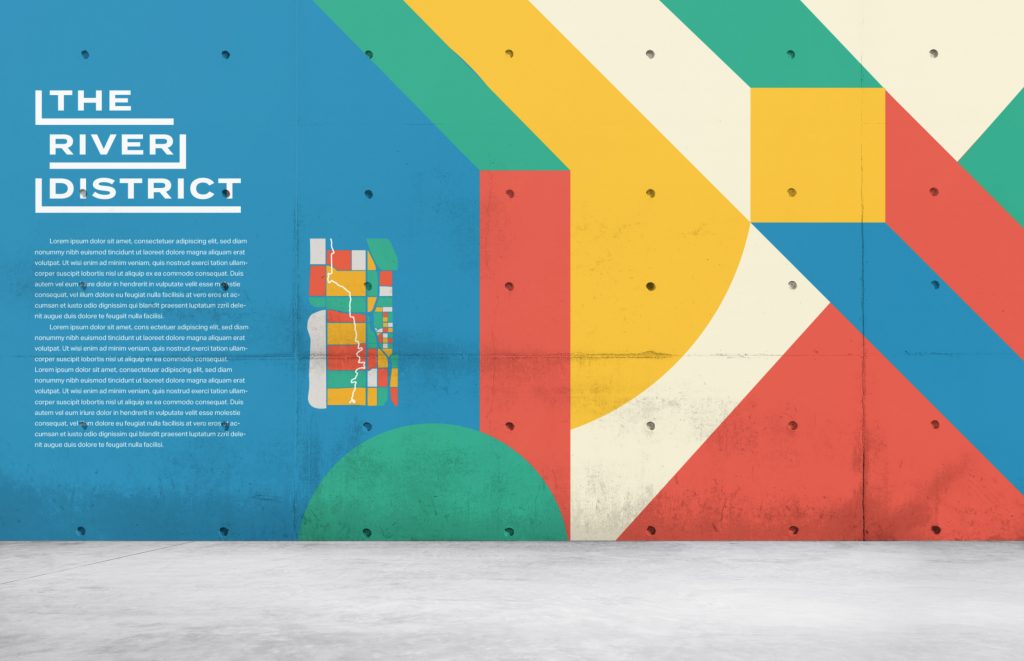 It’s been a few years since we designed the logo and the packaging for nush foods, but a lot has changed. During that time, they’ve made a lot of new friends and customers and learned a lot (like most new companies).

After a few suggestions, nush spent the last year reformulating their low-carb cakes with an even better ingredient list. Together with nush, we designed the packaging for four new flavors, and launched a marketing campaign complete with social media, newsletters, and custom videos. Some of which has received praise from the customers of nush. “Awesome Video!!” says an instagram follower of the keto snack company.

You might have heard us mention Nature’s Seed in a previous newsletter (we showed you all a glimpse of their soon-to-be website that we designed), and, well, we want to share something else that’s been budding for some time—seed packaging.

Nature’s Seed is a local Utah seed company that sells directly to consumers. They have hundreds of seed varieties, so we were so excited for a chance to refresh the packaging and take on the challenge of creating a streamlined and flexible concept. Plus, our package redesign reflects a fresh and sophisticated look and feel to their current product line. We upheld strategic considerations when it came to implementing the design of the Nature’s Seed packaging from brand imagery to color use for the categories of their seed varieties—grass, wildflower, and specialty—and headed on the challenge of typesetting and communicating the array of directional info for the seed consumer. 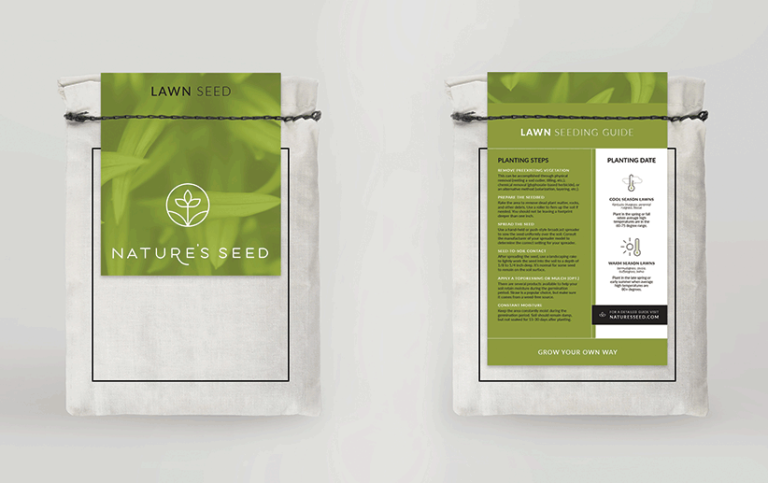 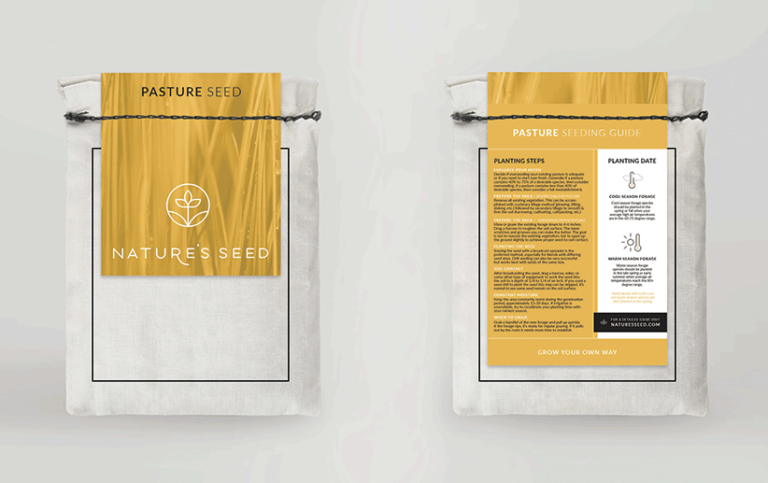 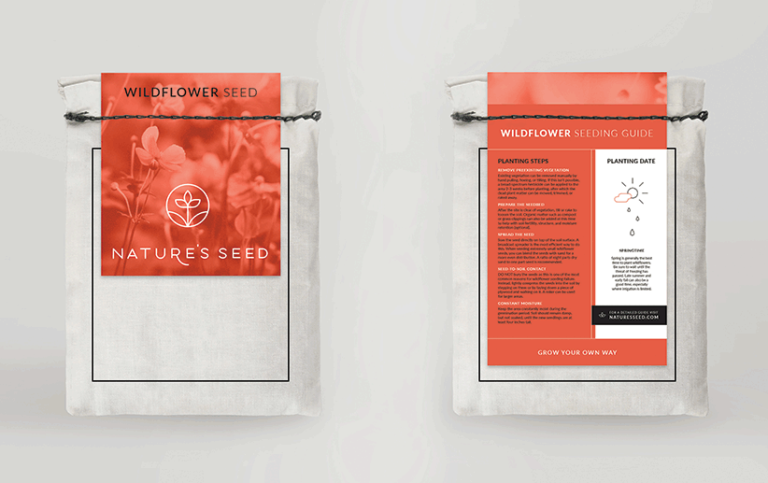 A reusable and custom printed cotton bag will be used for the seed bag packaging, which will also look attractive planted around any homeowner’s garage or shed. Super multipurpose. Oh, and Wilson won’t help but continue to peer (more like gawk) over the fence at your bloomin’ yard.

Hot off the press, we just designed and printed our sixth Studio Magazine for the U of U’s College of Fine Arts.

Last year’s issue was just honored at the AIGA Top 100 Show. The oversized magazine-like brochure is a 44-page review of the past year in the arts, and celebrates the activities, initiatives, and accomplishments, including an annual report for the College. Each major story is treated with typographic and photographic displays that amplify the impact and message behind Utah’s leading educational institution. Besides designing, we direct the printing and coordinate the complete solution. 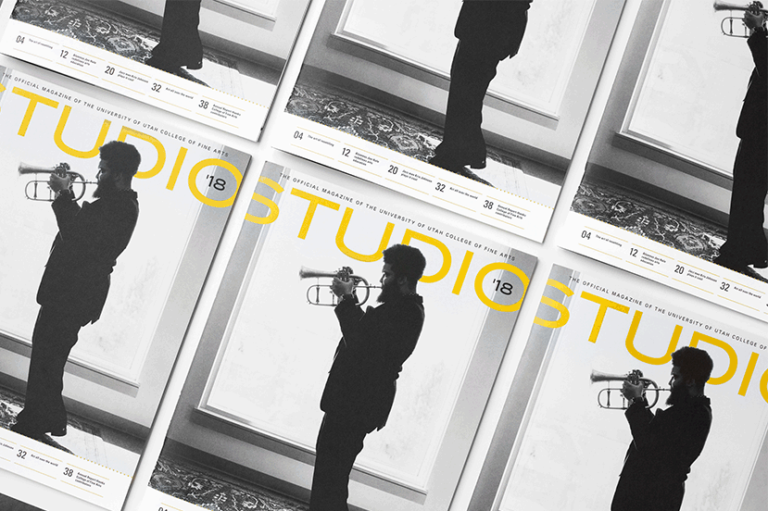 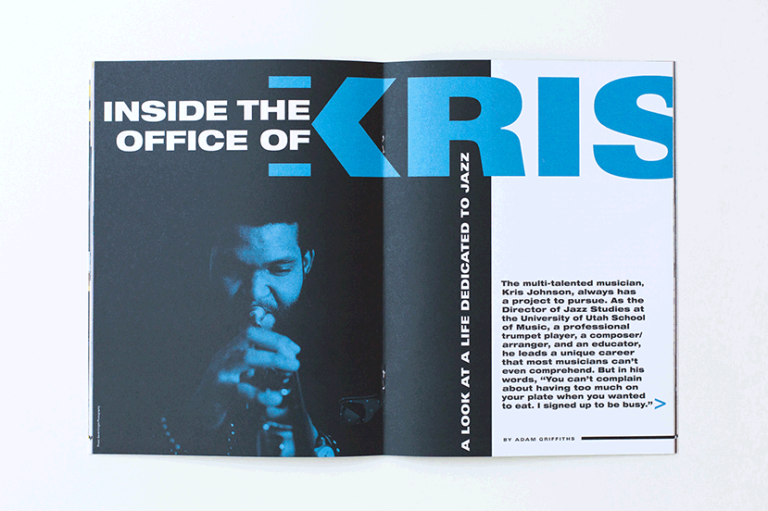 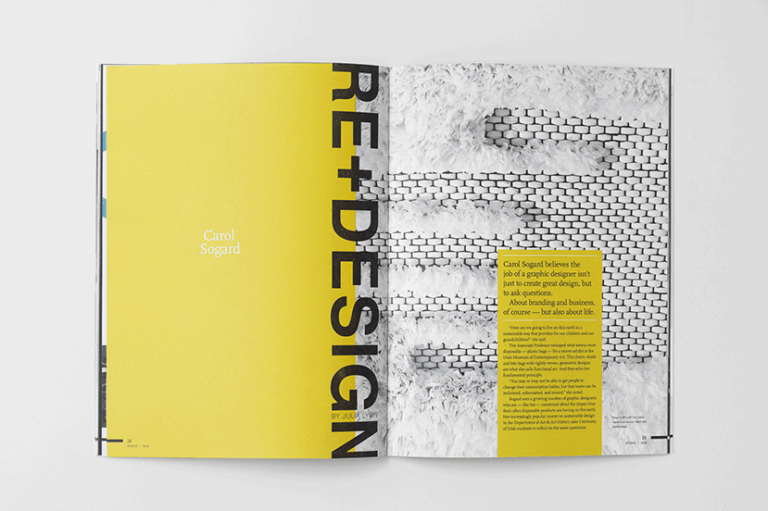 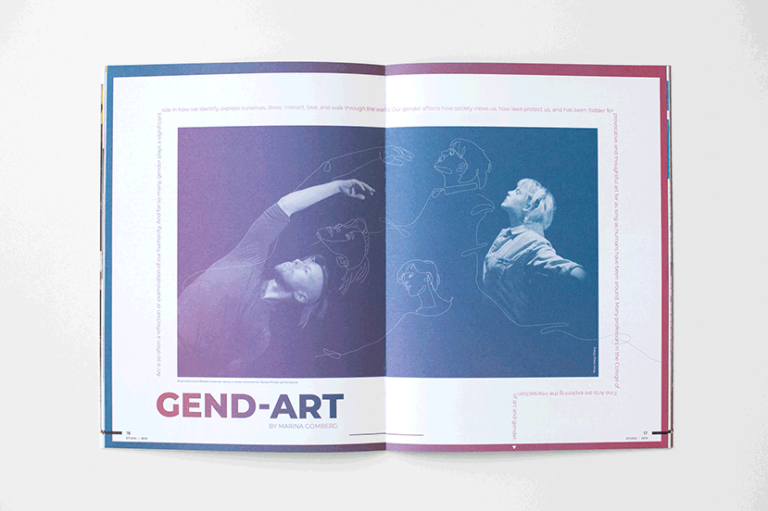 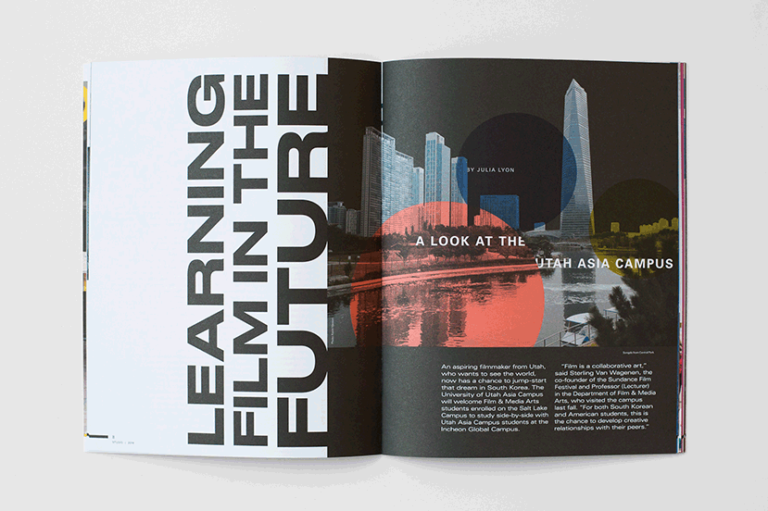 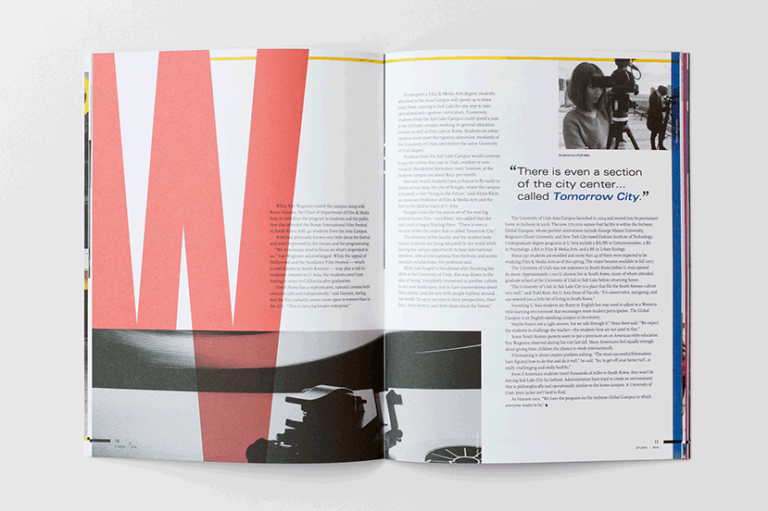 With a new logo, a new website (launching soon), and an extended color palette for modern8, an opportunity for new employee photos arose. We took a cue from our new website design (coming soon), and went with a monochromatic approach, each choosing our favorite of the modern8 brand colors to wear from head to toe.

You might have seen a sprinkling of these photos on our social media channels, but soon, oh so soon, you’ll see them in context on our website (launching soon).

A few years ago, we designed the branding for a local Utah tech company called, Impartner. So, when they asked us to design a video bumper for their Salt Lake based convention, we were excited for the opportunity to challenge ourselves to create a unique motion graphic that conveyed their 2018 theme—Transcend.

The bumper is a blend of video footage and graphic typography, which has been animated within the bumper. The combination of type animation and “transcendent” music allowed Impartner to convey the attitude and emotion of the theme to their audience attending their convention. We always leap at the opportunity to work on motion graphic videos for clients, as it is gives us the chance to flex our creative muscles in a different medium and allows us to work with companies to express their brand beyond their logo.